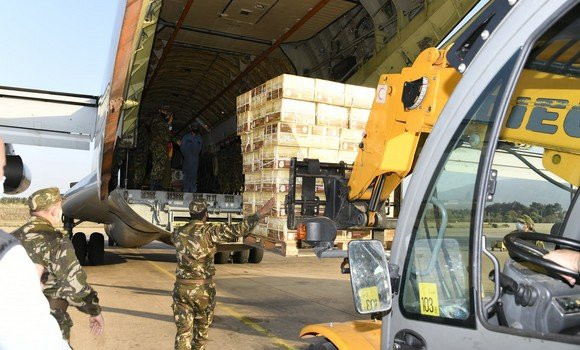 ALGIERS- Sixty tons of humanitarian aid made up of foodstuffs and pharmaceutical equipment will be sent aboard two military aircrafts, coming under the Algerian Air Forces, to the Sahrawi people in the refugee camps of Tindouf, the National Defense Ministry said Sunday in a statement.

“As part of the solidarity actions between Algeria and the Sahrawi people, 60 tons of foodstuffs and pharmaceutical equipment were loaded Sunday 15 November 2020 aboard two (02) military aircrafts coming under the Algerian Air Forces which were made available by the High Command of the People’s National Army to send humanitarian aid to the Sahrawi people from the military basis of Boufarik, in the 1st Military Region, to the airport of Tindouf on Monday 16 November 2020,” said the source.

“The loading operation was carried out under the supervision of head of the Algerian Red Crescent Saida Benhabiles, in the presence of the ambassador of the Sahrawi Arab Democratic Republic (SADR) to Algiers, representative of the United Nations High Commissioner for Refugees in Algeria Agostino Mulas as well as journalists from different media outlets.